Visit to the Higher Institute of Human Sciences of Tunis, University of Tunis El Manar 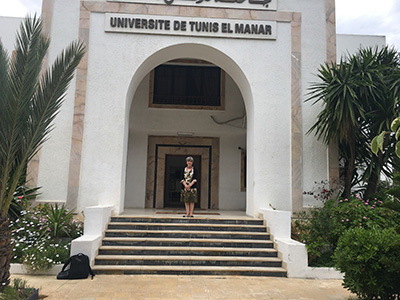 My aim with this rather long report, which includes facts about not only my visit to Université de Tunis El Manar, but also my experiences as a person, is to encourage more colleagues to visit and cooperate with more universities in Africa, starting with Tunisia.

I wish to start this report by thanking my Tunisian colleagues, especially Samira Mechri and Rim Triki, for their warm welcome and support throughout my stay.

Thank you even to Rakia Boulakbech, from the Ministry of Education, and Lamia Benamor, Service communication activités culturelles et coopération internationale at the Tunisian National Library, for taking time to meet me, with a very short notice.

There has been a “before and after” for this visit at Université de Tunis El Manar and the Higher Institute of Human Sciences of Tunis. One of the objectives was to prepare a second visit during the autumn, including teaching; another, and not the least, to get acquainted with the university, for instance curriculum for courses and course literature, examination procedures, access to university library, venues, housing, in order to prepare future exchanges for staff and students. 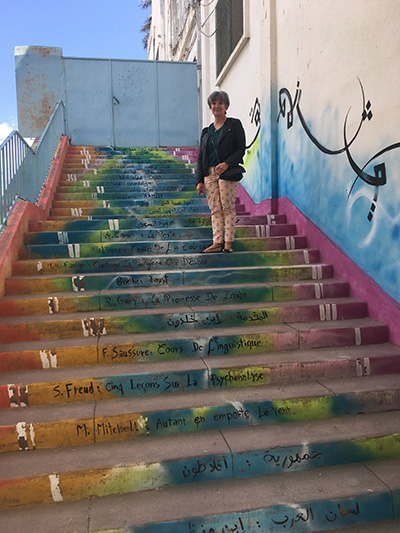 The main purpose was though, for some of the reasons named above perhaps to discover Tunis and the Tunisian culture (and university culture). Although I had been reading a lot about both Tunisia and navigating on the university website, I was not sure about what was awaiting, partly because of some warnings from colleagues and friends, afraid for my security both as a European and a woman. In addition, I was arriving just before the period of Ramadan and wondered if this was affecting life in Tunis, both in general and at the university. Thus, even though I was very confident about my staying going well as a European female teacher and researcher, I certainly was traveling with some own prejudices in my luggage.

To start with the latter, I can now say that I always felt safe during my sojourn, at the university of course, but even when I was walking alone in Tunis, day as night, or took the train alone to visit the city of Sousse (about 2 hours from Tunis). Transportation is easy, safe, and cheap (both public transportation and taxis). Getting lost a couple of time, I always managed to get some help. The fact that I speak French was very helpful, I must add. And being a European woman -or simply a woman, in Tunis certainly is nothing to fear, I always felt well respected, although being treated as just a tourist was sometimes annoying. But being able to answer firmly and politely both in French and Arabic: “Non merci” or “(Ka)La, chukran” surely helps in some situations, as it does in many other countries all around the world.

Arriving to Tunisia without any TND (Tunisian dinar) in my wallet was a bit of a worry. You cannot easily buy any TND in Sweden, but getting some from a cash machine at the airport was almost a piece of cake (almost, because I was miscalculating the change and there is a limit about how much money you can take out! I took out too much anyway, so I’ll have some till next time). Life is rather cheap in Tunis, at least it felt so for me. The queue to get my stamp at the immigration gate was long, but so interesting! Getting from the airport to the hotel was an easy and cheap taxi ride. My driver was totally deaf but it went very well. Apps on a phone helped, as did his perfect knowledge of the rather busy traffic. WIFI works well in most places, at least it was very good in my hotel.

The Hôtel Royal Victoria, where I stayed, is located in the building of the former British embassy, near the Medina. I found it great to be able to walk around both in the Medina and in the small streets all around, or to go to the Marché central nearby, and observe people even from my balcony, which turned out getting even more entertaining when Ramadan had started, as people, families, friends, lovers and many children or teens go to the Medina to pray and/or party after the break of the fast, around 7.30 pm. I had to cross the Medina to walk to the university, and after a while -and me explaining I was working in Tunis for a couple of weeks, no one would try to sell me anything, I was considered as a “résidente”. I must say that all the guiding and explanations from my colleagues on my first days certainly facilitated my acclimatization.

As for Ramadan, it surely affects everyday life (and nights!) in the city and at the university, but life goes on, and the students had exams just as planned in their schedule. Some were fasting, some not, the same applied all staff at the university.

My colleagues Samira and Rim organized some very interesting cultural visits, for instance at Sidi Bou Saïd and Carthage, during which we often even discussed history, religion, policies and education. I really felt blessed to be able to follow the traces left by Hannibal in Carthage and see with my own eyes, ruins left after both Romans and Phoenicians. The Tophet also reminded me of Flaubert’s Salammbô, a novel he found inspiration about in Carthage. The Arabic or, should I write, Tunisian and Maghreb culture and monuments are of course also all around. I would describe Tunis as a cosmopolitan city. Many tourists, I heard, come from Algeria. The language most spoken is Tunisian, Arabic with many touches left after the French colonial period, of which you also can feel the influence in the educational system in Tunisia today.

I was invited by my colleagues to a couple of great culinary experiences, once at the Medina and the other time in a very famous restaurant serving a special “breaking of the fast” menu. Although Tunisian wine was praised by some colleagues, I was during my sojourn following most Tunisians’ way of life, and went for water (the temperature went up to 29 degrees and more, with chilly nights) and tea culture, which I highly recommend!

I visited by myself the Bardo museum, very impressive, and took as already mentioned the train to Sousse, which has a beautiful Medina and strand promenade.

I had the opportunity to visit two campuses, and to meet with students, librarians and colleagues, many teachers and two deans. The discussions were held sometimes in French, sometimes in English, most colleagues and students mastering both languages fluently. It was great to be able to access some syllabus and course literature, and also to observe the exams procedures, very strict. It will help me to prepare my lectures when I return in October, to teach. Together with Prof. Samira Mechri, we have already planed the contents for my lectures, most will be held in English and will deal with educational matters, one about francophone literature in North Africa (in which even matters of education and post-colonialism will be included) will be conducted in French.

The meeting with the students was very informative. Three of the Tunisian students I met will soon study at Uppsala university, and one, from Norway had been staying at the Higher Institute of Human Sciences of Tunis, University of Tunis El Manar for one semester and was very enthusiastic about his experience. Housing, cultural life and music, contacts with both international and Tunisian students… as well as studies: all had been perfect.

My planned visit at the Institut français (they were supposed to help me to visit bilingual schools) was cancelled but I am invited to book a new meeting when I come back in October. My meeting at the Ministry of education was as informal as informative, I was able to gather many facts about education in Tunisia at all levels, both rules, reforms and challenges, some due to demography and emigration. I have also been assured that some permission will be delivered to me for my next sojourn to visit schools, which is compulsory (one deception during my stay was that it turned out to be impossible to visit schools, having no permission from the ministry and most of schools having one week of holydays, which I had no idea about).

Both visits at different university libraries, including the archives several floors down in the cellar, and my meeting at the National library gave me the opportunity to have an idea of the literature used by colleagues and students at the university: even if there is a great deal of literature in English and of course Arabic, the francophone trend is obvious, something of which students or colleagues from Uppsala university who wish to study or teach at El Manar should be aware of. Of course, at the department of English, all courses are given in English. The MA in English and Internatinal Relations as well as the MA in Inter-cultural Studies are two examples of the ambitious level at Université de Tunis El Manar. 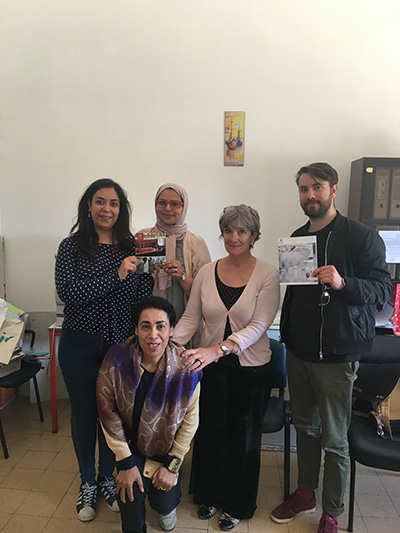 My colleagues Samira Mechri and Rim Triki are also involved in international cooperation with for instance Sicily, regarding migration issues, of which we discussed a lot as it is part of my teaching and my research interests. I look forward more discussions and collaboration in just those issues.

I am very satisfied with my visit, and look forward going back during the Fall, to teach. I even hope that I can become an ambassador for future staff and student exchanges between Uppsala university and Université de Tunis El Manar, especially the Higher Institute of Human Sciences of Tunis. If you have any questions, just ask!